Vande Bharat: Bangalore Mirror caught up with some of the men to understand what happened when darkness fell

As on Tuesday night, a group of young men quickly formed a human chain around a temple to prevent the incident from taking on a communal colour. It is acts like these that keep India alive and kicking


If there could be a human Band-Aid on a night of terror, this was it.

Syed Mohammed Haneef (27), along with eleven of his friends, was at Lajawab Restaurant in Mattadahalli in RT Nagar, on Tuesday evening.

Mohammed Asif, one of his friends, was treating them to dinner as his daughter had scored 84 per cent in her SSLC exams. But evening took a different turn when they started receiving disturbing forwards on their WhatsApp, of violence breaking out in Kaval Byrasandra.

“Since the spot where the violence had broken out was hardly a kilometre away from where we were, we decided to go there and check it out,” said Haneef to Bangalore Mirror.

An architectural engineer, Haneef runs a YouTube channel named ‘Meri Awaz Suno’. When Haneef and his friends set out towards the bus stop, he thought he could get some video content for his channel. When the group was just 500 metres away from MLA Akhanda Srinivasamurthy’s house, they saw three cars torched – one was near the MLA’s house and two other cars were set on fire closer to an Anjaneya (Hanuman) temple near the bus stop.

That’s when he knew that this was bigger than he had imagined. “A few local youths who belonged to a particular community were standing in a group near the gate of the temple. When we asked them why, they said that they were trying to protect the temple from the protesters,” said Haneef.

The charred remains of vehicles parked near Naveen’s residence

Haneef and his friends, Mohammed Asif, who runs a flour mill, Noor Mohammed Azam, a farm vehicle driver, Mohammed Khaiser, a cricket player, Nadeem Khan, an interior decorator, Syed Khaja, a carpenter and seven others joined the group of youths and formed a human chain around the temple.

They stood there, from 10.45 pm to 12 midnight, when police platoons arrived and asked them to leave as they were clearing the area. 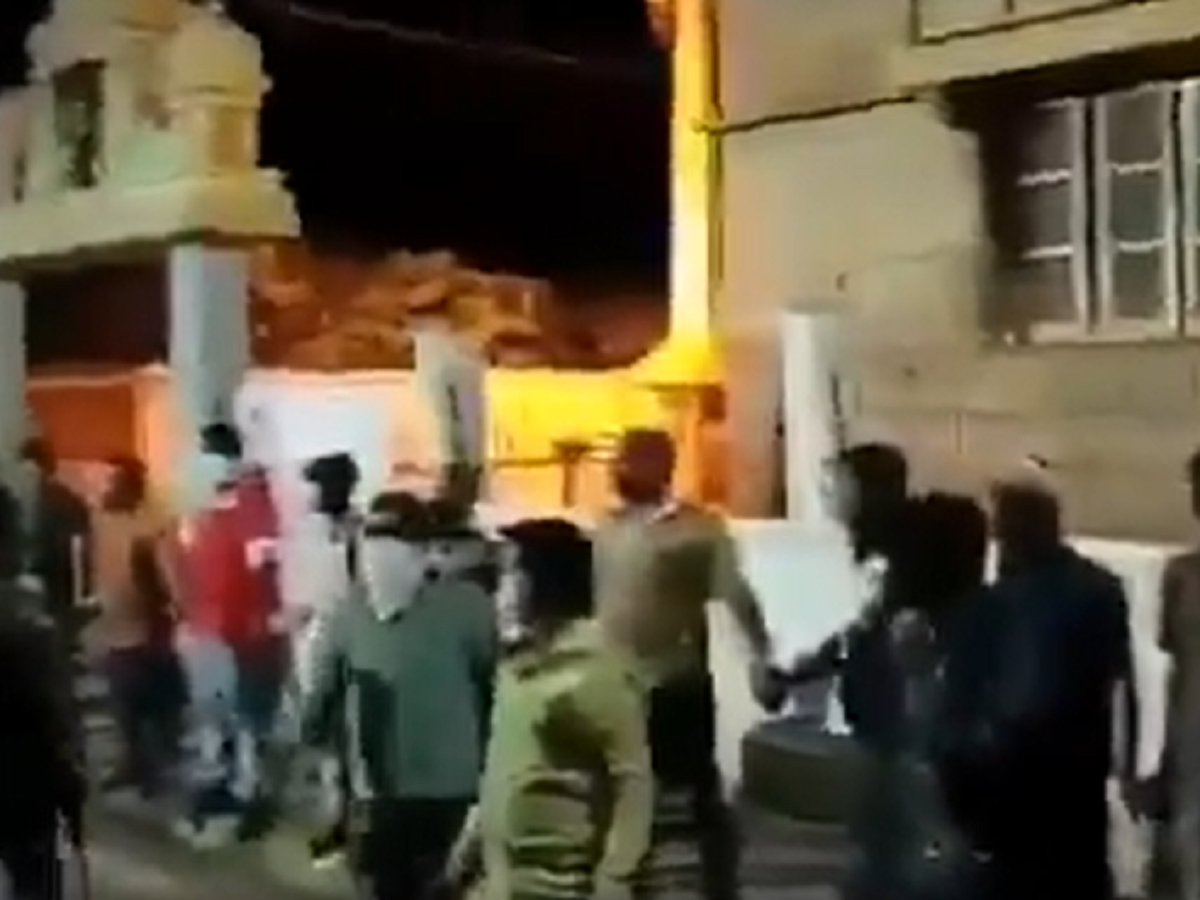 “They were just local boys who lived around Kaval Byrasandra bus stop. When we joined in, they welcomed us and soon, many more joined in, and in a matter of ten minutes, we had around 100 people forming the human chain around the temple. We were protecting the temple from the mob which was out to destroy the neighbourhood,” said Haneef.

“We left when the police came and asked us to clear the area. We could see that there was a lathi charge and teargas was used. When we left, we could see more than eight Hoysala patrol vehicles parked near the Pushpanjali theatre with senior police officials inside and a large number of police security forces deployed in the area,” Haneef added. 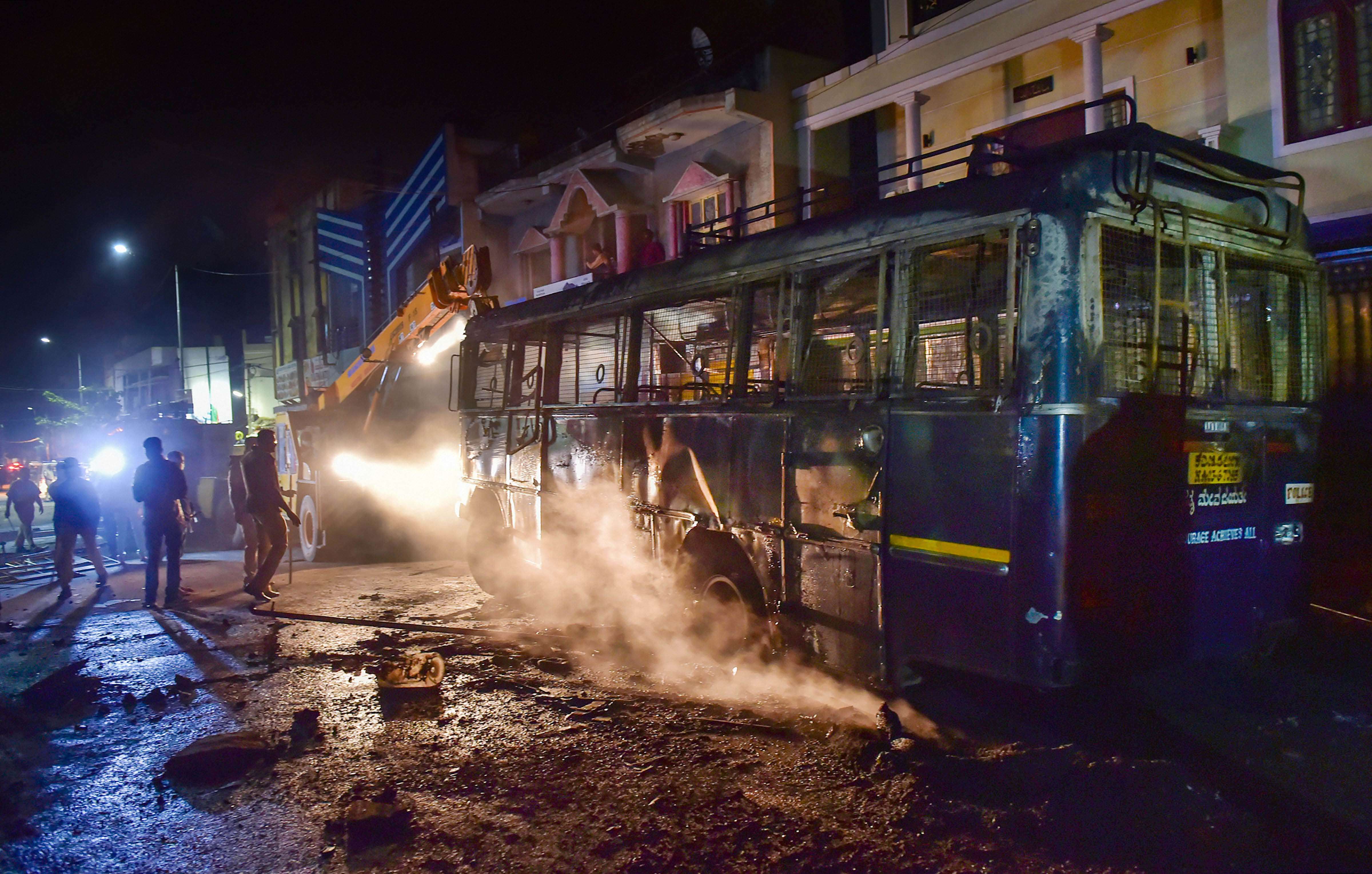 Saqib Idrees, a resident of the neighbourhood told BM that there were two groups, one was indulging in violence and they were mostly members of the Social Democratic Party of India (SDPI) and the other group was trying to stop them and even trying to protect properties from being destroyed in this area.

The violence started on Tuesday night. At around 9 pm, a group of people approached the police with a complaint against MLA Akhanda Srinivasamurthy’s nephew, P Naveen (35) for posting a derogatory message on Facebook. However, the police did not entertain their complaint and asked them to sort it out by talking to Naveen.

Enraged, the group started circulating the derogatory message in their groups, and soon a crowd gathered in front of the DJ Halli police station. Simultaneoulsy, thousands gathered in front of MLA Akhanda Srinivasamurthy’s house and started vandalising property and vehicles by torching them and throwing burnt tires and petrol bottles inside his house. The irate mob also vandalized the DJ Halli and

Advertisement
police stations and set fire to many police and public vehicles they spotted on the road. In the melee, miscreants even barged into houses and robbed cash and valuables.

Fearing that the mob would desecrate a Hanuman temple close to the MLA’s house, local youths belonging to a particular community, along with Haneef and his eleven friends, formed a human chain so that the temple was protected and the situation does not escalate into communal clashes.

There’s a lesson that Haneef and his friends have taught us on a night of terror. Hope their efforts heal our city.

In Photos: Violence breaks out in Pulakeshinagar over derogatory post shared by Congress MLA’s nephew

Shocking incident of mob violence emerged from Bengaluru on Tuesday night soon after Congress MLA Srinivas Murthy’s nephew Naveen shared a derogatory post on social media. Following the violence in Pulakeshinagar, section 144 has been imposed in the entire city while curfew has been imposed in DJ Halli and KG Halli police station limits. Photo by Kaushik JN/MMCL

At least three people have lost their lives and several persons have been injured in the clash. Bengaluru City Police Commissioner, Kamal Pant, said that the situation is completely under control. “We are getting some companies from RAF, CRPF & CISF, to join our security arrangements,” he said. Photo by Kaushik JN/MMCL

In the early hours of Wednesday, Bengaluru Police informed via a tweet that it has arrested the Congress MLA’s nephew. However, after he was detained by the police, Naveen had stated that his social media account was hacked. So far, as many as 150 people have also been arrested in connection with the violence in the city. Photo by Kaushik JN/MMCL

Around 60 police personnel have sustained injuries in the violent incidents of stone-pelting and attacks by rioters. Police officials said that protestors had rained bottles on a police van transporting police personnel to the affected area. Photo by Kaushik JN/MMCL

‘Strict action against perpetrators is certain’

Karnataka Chief Minister BS Yediyurappa informed that directives have been issued to take strict action against accused of Bengaluru violence and asserted that the government has taken all possible steps to curb the situation. While appealing people to maintain peace, he also said that violence against journalists, police and people last night was unacceptable. Photo by Kaushik JN/MMCL

The post is said to have triggered communal violence in East Bengaluru. Around 1,000 people had also gathered outside the KG Halli police station demanding the police take immediate action against the MLA’s relative for uploading the post. Photo by Kaushik JN/MMCL

The angry mob had gathered outside the MLA’s house and burnt down the vehicles parked outside his house in Kaval Byrasandra. His house was also vandalised. Fire tenders were immediately rushed to the spot but the mob did not let the vehicle pass through. Photo by Kaushik JN/MMCL

An official from fire and emergency said, “The mob did not let our vehicle inside and vandalised our vehicle as well. They broke the windshield of the vehicle and the vehicle had to be parked nearby in RT Nagar police station. The mob has burnt down two cars, five bikes and an auto.” Photo by Kaushik JN/MMCL

MLA Akhanda Srinivas Murthy had released a video last night, requesting the mob not to act violently and let the law take its course against those miscreants who are behind the act. Photo by Kaushik JN/MMCL

Minister says the incident was a ‘planned riot’

Joint Commissioner of Police (Crime) Bengaluru, Sandeep Patil, said that 145 people have been arrested till now in connection with the violence in the city over an alleged inciting social media post. Meanwhile, Karnataka Minister CT Ravi termed the violence as a “planned riot” and alleged that the Social Democratic Party of India (SDPI) is behind the incident that claimed three lives. Photo: ANI