What air travel looks like in the new normal

As the aviation sector slowly gets back on its feet following the devastating impact of COVID-19, we track what is being done to ensure a safer travelling experience for flyers

For Rajarshi Mukherjee, a frequent flyer, the pandemic has put a spoke in the wheels. His work meetings are now over Zoom calls, and all his getaways are restricted to virtual tours.

With domestic flights resuming in May, however, he finally braved a flight back home to Kolkata from Hyderabad where he works. “I felt the aisle seat would be a bad idea as it would involve brushing against people walking by,” he says over phone from Kolkata.

Of course, the middle seat was out of the question too. “So, I paid extra and bought a window seat,” he says. Other than his face shield (provided by the airline), he also had on a cap and a full sleeve jacket to make sure his head and hands were not exposed.

Since July, however, airlines such as Vistara and Indigo have come forward to ease distancing fears with the offer of a ‘double seat’, an option that allows flyers to book the seat next to theirs at a reduced cost. It is safety while flying that concerns Rajarshi the most. On his flight to Kolkata, he observed that “some people did not bother to wear their masks”, but a few did have on PPEs and shower caps. “I guess it depends on how stringent the airlines are with their safety measures.”

There are other novel ways with which airports are seeking to minimise person-to-person interaction while flying. A spokesperson for GVK-MIAL, which operates the Chhatrapati Shivaji International Airport, Mumbai, says passengers are encouraged to check-in online from their home or office, and make use of contactless payment at the airport restaurants and retail stores.

From imprinting ‘blooming flower’ floor markings and disinfecting common surfaces (including elevator buttons, escalator handrails and security check trays) to making provisions for “the eventuality” that any symptomatic passenger is identified at the airport, GVK-MIAL says that it is working to ensure smooth functionality at the Mumbai airport. At the Chennai airport, “touchless measures” in screening and stamping services among others, with deep cleaning of the whole terminal, fogging, and social distancing markers are what passengers can expect at the departure terminal. 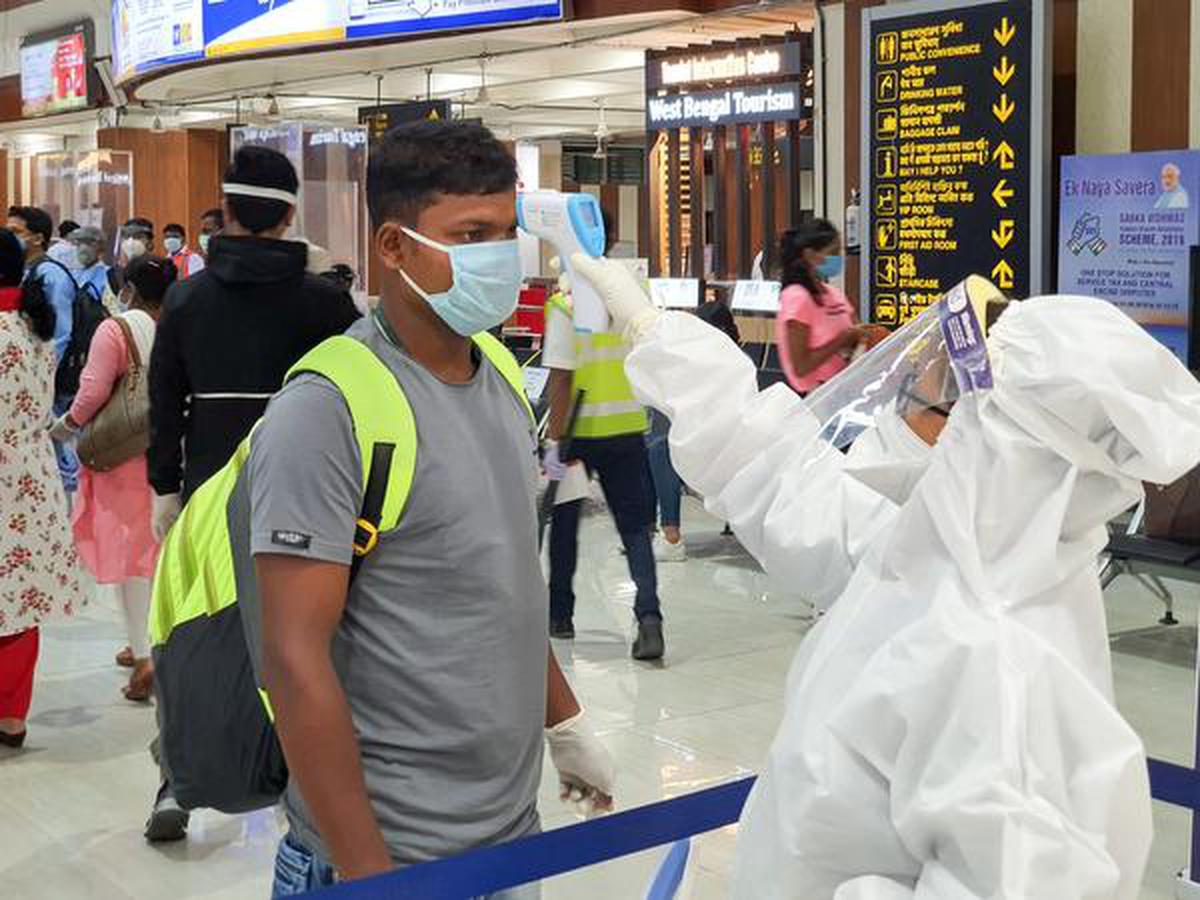 However, there is still a growing fear of picking up infection from flying, something that Boulter says is a long shot. “It has been analysed that the risk of COVID-19 transmission from one passenger to another on board is low because the customers sit facing forward and not toward each other. The seat backs provide a barrier, the use of HEPA filters and the direction of air flow on board (from ceiling to floor), and the limited movement in the aircraft once seated only add to the onboard protection,” he says.

Agrees Sunil Bhaskaran, CEO of Air Asia India, that has just rolled out the Digi Yatra services in association with the Bengaluru International Airport Limited, “This particular virus is 6.602.14 microns, and through the HEPA filters, 99.99% of this size gets filtered out.”

“The flights have full air circulation, with fresh air every two to three minutes. Which means, the full air is changed 20 to 30 times an hour , it gets filtered out,” Bhaskaran adds. For now though, in-flight dining is a thing of the past, but the pandemic has nudged people to embrace technology; some of the existing services such as online web check-in have gone up by 90-95%. “If you had asked this during pre-COVID-19, I would have said it’ll take us three years to get to this number,” says Bhaskaran.

Bhaskaran feels that while the number of people travelling is few, there is also an uncertainty about quarantine laws which tend to differ from city to city. “If that uncertainty gets taken out, we will have a better picture of how people will travel,” he says, hoping to see an increase in the number of fliers.

In Chennai, the airport has seen an increase of about 15% to 20% in the number of passengers since May. “On the first day since flights resumed, approximately 4,500 flyers flew out of Chennai,” says the spokesperson for Chennai Airport.

Capped airfares is a big reason behind these few number of flyers. Boulter admits that capping was “a positive measure” to revive demand while still keeping it feasible for airlines to operate. “However, once the demand picks up, the Government should re-look at the capping for airlines to be able to reduce cash-burn and retain jobs. We are hopeful to see competitive strength return by April 2021, which will help us cover our costs and break even,” he says, adding, “We expect to emerge out of this crisis stronger than before.”

‘We are down in the dumps as everything has been lost’