Kajal Aggarwal, on the occasion of Mother’s day, faced flak on social media as she was called out for ripping off a poem by an Instagram user. However, after this, Kajal edited her post and gave credit to the writer Sarah for the poem. The actress, who also shared the first picture of her son Neil with a heartfelt note on Sunday, had shared a poem titled Dear Mum.

As Kajal expressed her gratitude towards her mother Suman Aggarwal for being the best grandmother to Neil, she copied writer-poet Sarah’s lines as her caption for Mother’s day post. Objecting to actress’ post, the Instagram user shared a screenshot of the same which she now deleted and wrote, “My Dear Mum poem passed off as original work by @kajalaggarwalofficial. Even the caption is copied with a few words swapped out haha. If anyone has time to comment on her post asking her to give me credit, would hugely appreciate it!! Hopefully a misunderstanding…” 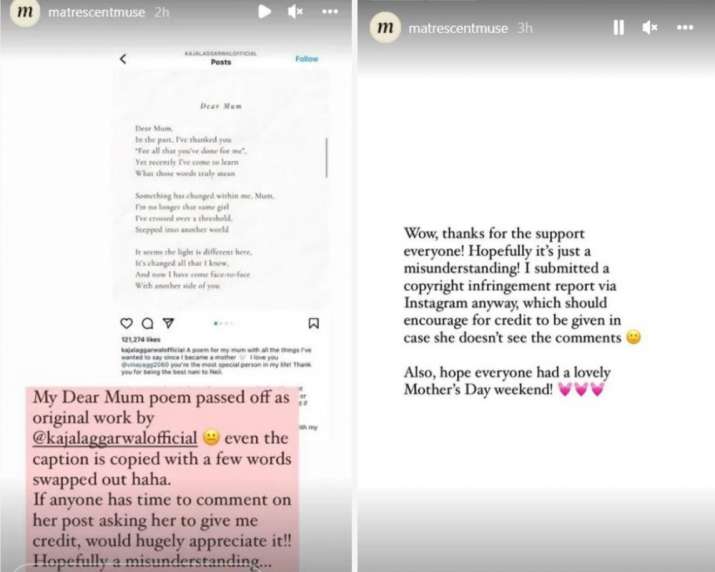 After her objection gained momentum on social media, Kajal edited her poem and gave due credit to Sarah. However, the comments on Kajal’s post have been disabled. ALSO READ: Happy Mother’s Day: Wishes pour in from Alia Bhatt, Vicky Kaushal, Katrina Kaif & other Bollywood celeb

Earlier, Kajal Aggarwal shared a 7-page creative where she wrote, “Dear Mum, In the past, I’ve thanked you “For all that you’ve done for me”. Yet recently I’ve come to learn what those words truly mean. Something has changed within me, Mum, I’m no longer that same girl I’ve crossed over a threshold, stepped into another world. It seems the light is different here, it’s changed all that I knew, And now I have come face-to-face with another side of you.”

She continued, “Some nights, I have been wide awake Rocking my babe in the dark, Thinking, is this how you held me, too? With my head pressed against your heart? Did you ever gaze at me and wish you could just press pause on time? Or study my tiny features, and think ‘How could you really be mine?’ Did you ever have the strangest sense that I was still part of you? That my soul extended from your own, That my heart was your heart, too?” Malaika Arora REVEALS people told her being a mother would end her career: ‘Had working mom guilt’

Curious how things would have been back in the day for her mother, the actress then went on to ask several questions through her poem, “And Mum, did you ever mourn the girl that you had been before?…” Take a look