Music maestro AR Rahman’s elder daughter Khatija Rahman got engaged to Riyasdeen Shaik Mohamed in an intimate ceremony. He is an audio engineer by profession. Khatija took to her Instagram handle and shared the update with her fans and followers. She also shared a picture from her D-day. Alongside, she penned a heartfelt note revealing that the engagement happened on December 29. “With the blessings of the Almighty, I’m happy to announce to you all my engagement with Riyasdeen Shaik Mohamed @riyasdeenriyan, an aspiring entrepreneur and a wizkid audio engineer. The engagement happened on 29th December, my birthday in the presence of close family and loved ones (sic).”

Many celebrities showered their love for Khatija in the comments section. Singer Neeti Mohan said, “Many many congratulations. This is such a wonderful moment.” Harshdeep Kaur commented, “Congratulations to the both of you. God Bless!!”

Riyasdeen Shaik Mohamed also shared the picture on his Instagram and wrote, “With the blessings of the Almighty I’m happy to announce to you all my engagement with Khatija Rahman, @khatija.rahman musician, producer & philanthropist. The engagement happened on 29th December, on her birthday in the presence of close family and loved ones.”

Khatija commented on his post and said “Blessed and grateful to have got you in my life Riyasdeen. In shaa Allaah. Allahumma Barik.” 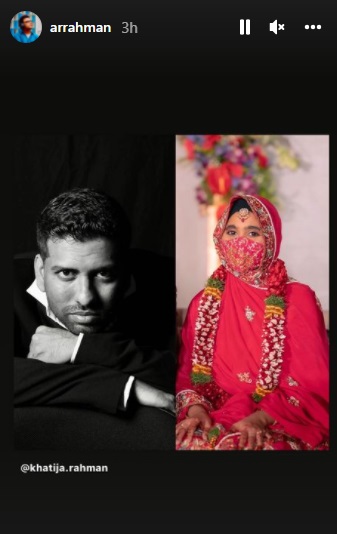 On the professional front, Khatija Rahman made her singing debut in films with her father’s composition “O Maramanishi/Puthiya Manidha” in ‘Robo’ alongside the legendary SP. Balasubramanyam and his father AR Rahman. The film was directed by Shankar Shanmugam and featured Rajnikanth. Reportedly she was just 14 years old when she sang the song.

For the unversed, AR Rahman got married to Saira Banu on March 12, 1995. They are blessed with three children, two daughters Khatija Rahman, Rahima Rahman and a son Ameen Rahman who are musicians.

Did you know Shreyas Talpade dubbed Hindi version of Allu Arjun’s Pushpa? Know about Baahubali & others